Ricky took the younger kids to pick out some Mother’s day presents for me on Saturday. I knew what they were up to but before leaving Madeline (4) hunted me down to ask me if she could go for a ride with daddy. I told her yes and she continued excitedly, “We are going for a ride, nothing else..... Oh, AND YOU CAN’T GO!” It made me laugh so hard. ❤️😂❤️She’s so darling.
It was the first time they have been to a store in seven weeks. They got home hours later and I was tilling up my flower garden in the evening. (Ricky had texted me earlier that he was keeping them out a bit longer to give me some quiet time. ) 💕 Once home they ran up to me grinning ear to ear and told me they just went for a drive nothing else. 😂🤗

Mother’s Day morning I could hear them running around excitedly and shouting at my bedroom door for me not to look or come out. Madeline came in to tell me a few spoilers, which I actually didn’t even really hear, and Bea (6) yelled at her. 😂

I took a nice long shower and then the kids were too excited to wait any longer. They had the cutest things for me. Ricky lets them pick out whatever what they want if he takes them shopping for gifts. That’s how I end up with preciously fun things like a Hula hoop and a unicorn piñata. (I did indeed impress the kids with my hula hooping skills. 😉) I love the unicorn piñata so much and haven’t had a unicorn piñata since I was a little kid. It is a pull string kind so I got to keep it intact while the kids happily got to the candy. The kids picked me out flowers and plants to plant outdoors and some cute garden decor. I love stuff like that. I love that my birthday and mother’s day are in the spring because I love ALL the garden stuff! The kids picked out their own gift bags for my gifts too. Everett got me a Noah’s Ark gift bag for his gift (like for a baby shower) which was so cute of him. I love seeing what they pick out. He picked me out a adorable frog planter.

Ricky made me eggs Benedict for breakfast and he even bought Canadian bacon for it. He isn’t allowed to eat or even be around mammal meats as they cook (the smell and vapor can make him feel sick) due to his Alpha Gal Allergy. But, he heated it up wearing a n95 mask and wore gloves handling it. 😂 😷
I wish I had gotten a picture. I was cracking up when I caught him cooking it. I told him I was fine with the way we now normally make it since his allergy (with turkey bacon which he can eat). He said Mother’s Day is special so it seems like a day to have the real thing. Lol! So cute and sweet! It was delightful and absolutely delicious. I appreciate his willingness and creative way of doing it. He definitely didn’t have to do that but I enjoyed every second eating it and that he put so much thought into it. 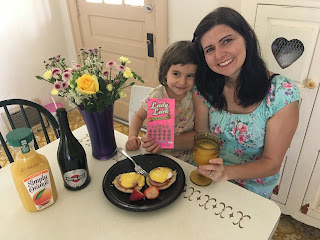 As if I wasn’t spoiled enough, Ricky and the kids had also driven to Baskin-Robbins to fetch me a quart of Daiquiri Ice, a childhood favorite. Our town’s store doesn’t carry it, so I knew he had to drive a bit further to get it. (He tried to buy it for my birthday in April but found out our store doesn’t carry it. Also as he tells it, they thought he was saying ‘bags of ice’ instead of Daiquiri Ice. 😆😆😆And it annoyed him so much he doesn’t want to go back to that one! lol!!!)
So that’s what they did with some of their time out. Very thoughtful! I’ve loved it since I was a little kid and it’s to this day a very special tangy, lime sorbet style treat!!

The lottery scratchers, spring flowers, and mimosas from Ricky were really cute and sweet. I was pretty sure I wasn’t going to win though ...I’ve long known I have already hit the lottery marrying him!
🥰🥰🥰🥰


Oh! And Sage brought me home a cheesecake when he got off work! Which is still in the fridge in the basement that everyone but me has forgotten about. Nom nom nom. 😂🐷🍽
at January 13, 2021

Ricky took the younger kids to pick out some Mother’s day presents for me on Saturday. I knew what they were up to but before leaving Madel...